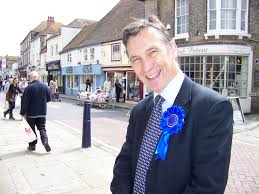 He is the Conservative Councillor for Sandgate and West Folkestone Ward.

It is one and half miles from his home to SDC Civic Centre in Castle Hill Avenue. So a three mile round trip.

For the Financial year 2014/15 Councillor Love charged the ratepayer one pound thirty five pence [1.35] every journey to travel to the Civic centre by car. Now the Shepwayvox team believe he could walk that distance.

A man who appears to be fit and healthy elects to travel by car one and half miles, three miles round trip and charge the ratepayers of Shepway. We believe this was wrong and is wrong.

Children who live within three miles of a school are not eligible for a bus pass and must walk, cycle, pay for the bus or get mum or dad to give them a lift.

Cllr Love who lives only one and half miles away, gets us to pay for his small journey. In a time of austerity, where his party, The Conservatives are saying we must cut back public sector, it is nice to see that some Cllrs are truly playing their part and are public spirited, it is a pity Cllr Love does not practice what his party preaches. Oh to be a Cllr.